So first pay respect to Robert Nester Marley even though I’m 3 hours too late!

I’ve been kind of ignoring okcupid, rarely checking it but I must say, the conversations have improved! Even though I have been asked to be a few guys’ girlfriend after only saying “HI” as well as invited out for drinks… I’m not sure if I’m ready to take.that.step. as yet!

And I must say these Quivers are just getting worse and worse…but mi amiga Alex has been getting more luck than me, she’s way more sociable and cake-alicious than me! lol

I’m a living contradiction: an advocate for the old school and old fashioned trying to use modern technology to …I don’t even know what I’m trying to do! 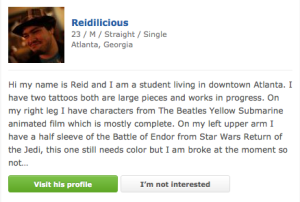 So there’s this thing called Quiver that shows you your top 3 matches aka guys who should make my “heart quiver”. *pause for dramatic effect* So this guy came up in my Quivers lol and I would love to know what about a guy who has the Battle of Endor from Star Wars Return of the Jedi on his upper left arm is going to make my heart quiver. It brought me great entertainment and just thought I’d share with you guys! Enjoy and Stay Tuned! Quiver Out!

So it’s day 2 of this “online dating” business and I am bored! These guys are boring! The art of communication and conversation is surely lost. So sad. “Hey” does not make me want to talk to you or make you seem interesting. *rolls eyes*

I may not last a week on this thing. My friend Alex has had better luck than me, I’m happy for her. But if nothing else I guess this a lovely learning experience. Rest in Peace Conversation. 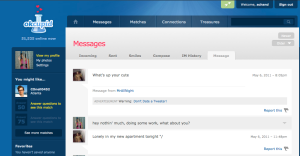 So, against the advice of most of the comments on my Facebook status, I decided to join an online dating site along with my friend Alex! I am a single, Trinidadian female currently studying in Atlanta and after being single (for forever) I decided I had seen enough eharmony, perfectmatch, etc. ads and thought “Why the heck not?!” So I will be blogging about my encounters (or lack thereof) on this site. The worst that could happen is I remain single…which I already am so I see at having nothing to lose! Stay tuned!

So far, I got 2 messages, none from anyone I’m interested in, but let the games begin!